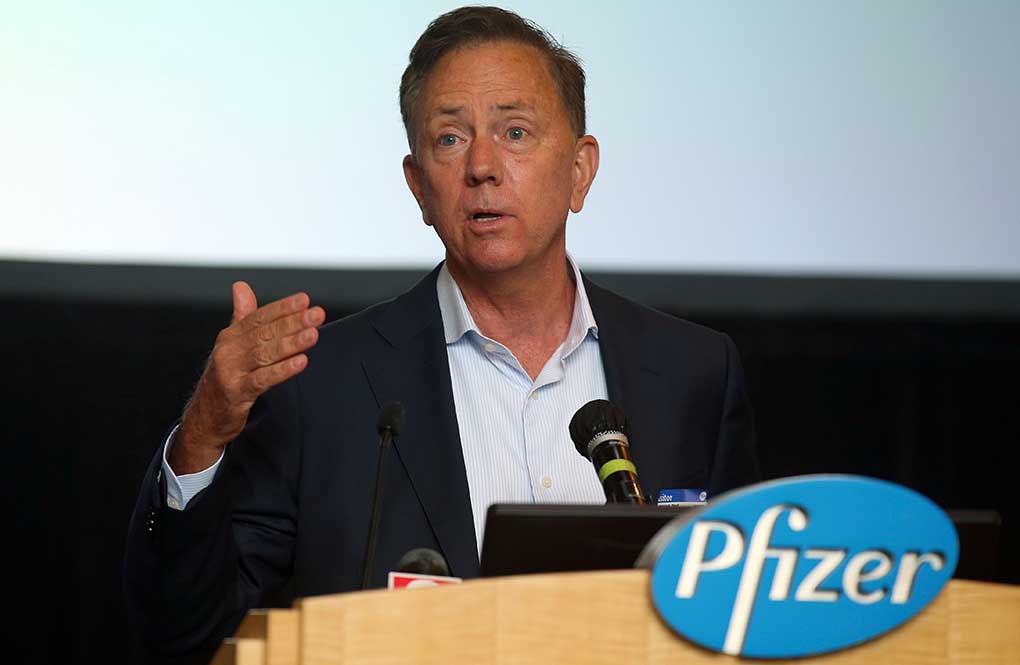 FAIRLESS HILLS, Pa. — Pfizer Inc. reported a 32% plunge in second-quarter profit, mainly due to the global coronavirus pandemic limiting marketing of and new prescriptions for its medicines, even as the drugmaker races to develop a vaccine.

Still, the biggest U.S. drugmaker by revenue posted a solid profit, nudged up parts of its 2020 financial forecast and reaffirmed the rest. Wall Street responded by driving Pfizer shares up 4%.

“Our continued strong performance speaks to the resilience of our business even during the most challenging of times,” CEO Albert Bourla told analysts on a conference call Tuesday. “We continue to believe that the second quarter, and particularly April, will be the worst” for us.

The maker of the world’s top-selling vaccine, Prevnar 13 for preventing pneumonia and related bacterial diseases, noted that as it had predicted, the pandemic restricted doctor visits by patients and company sales representatives, reducing prescriptions for new medicines and vaccination rates for many of its shots. However, sales rose for its medicines used to treat patients hospitalized with COVID-19.

Pfizer is among the drugmakers leading the race to develop a safe, effective vaccine against the coronavirus. It’s one of several drugmakers included in Operation Warp Speed, the U.S. government’s effort to accelerate development of multiple vaccines.

The first participants, in the U.S., received either dummy shots or the first of two planned doses of the experimental vaccine chosen as the best candidate based on the partners’ small early tests in people and animals. Pfizer executives said the companies plan to enroll up to 30,000 adult participants at about 120 sites in the United States and other countries, all by late August.

Research head Mikael Dolsten said in an interview that because the virus is spreading so much in many states and other countries, “it’s very feasible” to have enough participants become infected with COVID-19 by late summer to see how well the vaccine protected those who got it, compared with the infection rate in those given dummy shots. That would allow Pfizer to apply for U.S. approval by early October, Dolsten said.

The pandemic has infected more than 16.5 million people worldwide and killed more than 650,000. Roughly 1/4 of those cases and deaths have occurred in the U.S., though experts say the true number of cases is much higher.

Amid the turmoil, Pfizer continues to remake itself, aiming to create a nimbler company focused on creating new drugs. Last summer, Pfizer divested its consumer health business into a joint venture with GlaxoSmithKline. That business had brought in $862 million in the year-ago quarter.

Pfizer now is in the process of spinning out its Upjohn business, which sells older, mostly off-patent drugs, and combining it with generic drugmaker Mylan. The deal is now expected to close in the fourth quarter.

Revenue from Pfizer’s newer prescription drugs rose 4% to $9.8 billion in the quarter, led by breast cancer drug Ibrance, with $1.35 billion in sales and clot preventer Eliquis, which brought in $1.27 billion. Prevnar 13 added $1.12 billion in sales.

The Upjohn business saw sales plunge 32% to $2.01 billion, partly due to increasing generic competition in the U.S. for its former blockbuster nerve pain drug Lyrica.

Pfizer also reported second-quarter revenue of $1.24 billion for its sterile injectable drugs, $289 million for its “biosimilar” versions of injected biologic drugs and $1.4 billion in revenue from various drugmaker partners.

Adjusted income came to $4.4 billion, or 78 cents per share, topping the 68 cents that analysts expected, according to FactSet.

“While a vaccine could provide some level of upside to earnings, our positive view of the stock is driven by the company’s extensive pipeline and lower valuation relative to peers,” she wrote in a note to investors.