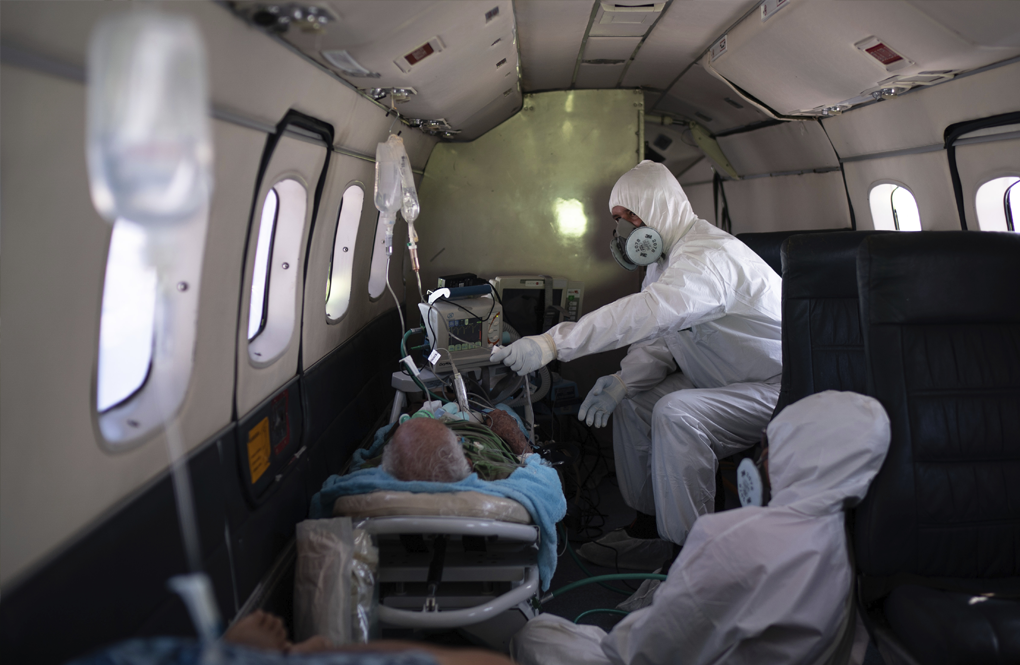 SANTO ANTONIO DO ICA, Brazil (AP) — Residents of Santo Antonio do Ica hid from the sun under umbrellas as they waited anxiously for the twin turboprop plane to land in their town in the farthest reaches of the Brazilian Amazon.

Aboard the aircraft, doctor Daniel Siqueira and nurse Janete Vieira prepared for the day’s mission: the evacuation of two patients from the municipality of some 22,000 people. Because COVID-19 has slammed its small population, with almost 500 cases, the town has the highest incidence per capita of any Brazilian municipality, according to a compilation of official data by the G1 news portal.

The lives of 89-year-old Sildomar Castelo Branco and the town’s mayor, Abraão Lasmar, would be in the health workers’ hands until they landed in state capital of Manaus, some 550 miles (880 kilometers) away.

The sparsely populated but vast rainforest region is among Brazil’s hardest hit, with scattered riverside towns completely unprepared to cope with the virus that crept upriver from Manaus. Some towns can’t get oxygen tanks refilled or don’t have breathing machines, forcing nurses to manually pump air into lungs. When they do have machines, power cuts frequently shut them down.

Many patients need higher level care — so they must wait for the puddlejumper to take them to Manaus, the only place in the state of 4 million people that has full intensive care units. While they wait, their conditions worsen.

“They managed to isolate the remote areas for a bit, but now (the virus) has invaded the remote areas, and there are a lot of patients getting worse who need to be brought to the capital,” said Siqueira. “If we leave them there, they would die.”

This story was produced with the support of the Pulitzer Center on Crisis Reporting.

Flying to Manaus is a gamble. The altitude and pressure during the trip can strain already damaged lungs, and a patient’s condition can deteriorate in a matter of minutes. The day before this trip, Siqueira lost a COVID-19 patient just 35 minutes after taking off. But there’s no alternative.

To reach Santo Antonio do Ica, near the border with Colombia, takes several days by boat on the Solimoes River, and there is only so much equipment small aircraft can bring in. Each turboprop can only bring out one critically ill patient at a time because of the demands on the accompanying medics; it can carry an additional less sick patient in a pinch.

Most medical personnel in Amazonas state are concentrated in the swamped hospitals of its capital. There was only one doctor working in Santo Antonio do Ica until Anancy Lasmar, the mayor’s niece, returned to her hometown to help. The town has only one ventilator.

“It’s hard not to get emotional. I was brought up here and when I got to the front line I saw everyone who I know,” Lasmar said. She has lost two uncles and 20 patients.

A federal judge ruled this week that the situation is so critical in the region, which is home to countless indigenous people who are particularly vulnerable, that authorities must urgently expand capacity at a military hospital in the area.

Amazonas, almost as big as Alaska, has the fourth highest number of confirmed coronavirus cases among Brazil’s states — despite a small population and insufficient testing. Brazil has confirmed over 271,000 cases and nearly 18,000 deaths; the daily increases to its death toll have been growing.

On Tuesday, state health authorities reported for the first time fewer infections in Manaus — home to nearly half of the state’s population — than in the rest of Amazonas. The numbers are reflected in the waiting list of patients requesting medical evacuations that has tripled in recent days, Siqueira said.

In Santo Antonio do Ica, he and his colleague had to jump into action even before their patients boarded. Castelo Branco, the octogenarian, urgently needed a breathing tube inserted — right on the runway. Sweating under his protective suit in the humid air, Siqueira performed the procedure.

“My dad never got sick. Even the flu couldn’t bring him down,” Castelo Branco’s daughter Telma Maria lamented. “But this damn virus brought him down.”

Mayor Lasmar, 53, always one to chat and joke with locals like a natural politician, smiled and waved at well-wishers who had gathered at the airport as he boarded the plane. But he couldn’t muster a complete sentence as he struggled to breathe.

Residents and relatives watched and prayed as the plane took off. They were unsure whether they’d see them again. For most people, the coronavirus causes mild or moderate symptoms. But for some, especially older adults and people with existing health problems, it can cause more severe illness and lead to death.

For the next three hours, doctors did everything they could to keep Castelo Branco alive, while the mayor, whose condition required less medical attention but was rapidly worsening, coughed nearby.

Minutes into the flight, Castelo Branco’s heart rate skyrocketed, forcing Siqueira to inject a cocktail of drugs. The loss of a patient on the prior day’s flight was fresh in his memory, and he didn’t want a repeat.

But just after his heart rate stabilized, Castelo Branco’s blood pressure plummeted. The medical team injected a second round of drugs.

Two ambulances were waiting at Manaus’ airport when the plane touched down. Its back hatch opened and Castelo Branco — along with a network of tubes, cables and machines — was pulled from the plane.

He still had a pulse.

“Now he’s no longer mine,” Siqueira said, breathing a sigh of relief that he had done his part.

As Lasmar climbed into the other ambulance, he gave a thumbs up and managed through strained breath to utter the words: “Thank you.”

Hundreds of miles upriver in Santo Antonio do Ica, five more people were waiting for airlifts that might not arrive in time.