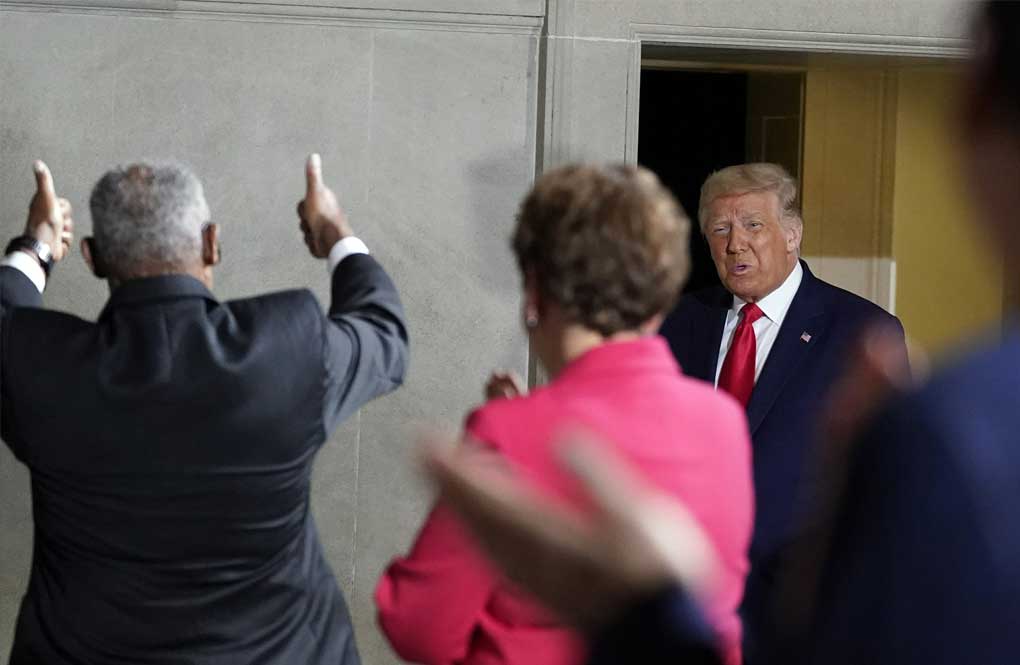 WASHINGTON — The gulf between President Donald Trump and public health officials over wearing face masks keeps widening, undercutting medical experts who say consistent face covering is one of the best tools — short of a vaccine — to fight the spread of the coronavirus.

Trump has gone back and forth on protective masks in the roughly six months since the virus has taken root in the U.S., muddying the message from doctors and other health experts.

White House officials insist that Trump has always supported wearing masks, but the president’s own words and actions tell a very different — and sometimes puzzling — story.

He dismissed mask wearing for himself, then allowed himself to be seen wearing one while visiting a military hospital. He has called it “patriotic” to wear a mask but seems to seldom pass up an opportunity to mock Democratic presidential candidate Joe Biden for his routine mask donning.

And on Wednesday, after the director of the Centers for Disease Control and Prevention told Congress that his mask might even be a better guarantee than a vaccine against the virus, Trump publicly undercut Dr. Robert Redfield.

“As far as the mask is concerned, he made a mistake,” said Trump.

Hours earlier, White House press secretary Kayleigh McEnany had said: “The president has always supported mask wearing, and he’s made many comments to that effect from this podium.”

Lawrence Gostin, a public health expert at Georgetown University’s law school, said Trump’s vacillation between portraying masks as an infringement on personal rights and touting them as crucial to stemming the virus has left Americans “absolutely dazed and confused.”

“One could forgive the American public for not trusting anyone,” Gostin said.

But Gostin also faulted Redfield for asserting that masks are more important than an eventual vaccine, at least until one is approved. Suggesting that being vaccinated is less important as long as people are wearing masks further clouded the public message, Gostin said.

Public health experts largely agree that COVID-19, the disease the virus causes, will be brought under control through a combination of social distancing, mask wearing and a vaccine.

“One of those three is not enough, you need all three,” Gostin said. “It’s such a simple message. It’s just befuddling that the White House doesn’t consistently state that message.”

Trump has very seldom worn a mask for the world to see, though he is regularly tested for COVID-19 and says he does wear one when he can’t practice social distancing. At one point, he suggested that the reason some people wear masks is to make a political statement against him.

The CDC recommended in April that people wear cloth face coverings in public when it’s difficult to be socially distant. But Trump immediately undercut the guidance, declaring he wouldn’t follow it and suggesting it would be unseemly to be masked in a meeting with a head of state.

The first image of a masked Trump surfaced on social media in May after he donned one for a behind-the-scenes tour of a Ford facility in Michigan. Reporters were not allowed on the tour, and afterward Trump told them he’d worn a mask in a “back area” only because “I didn’t want to give the press the pleasure of seeing it.”

In June, as he prepared to hold his first indoor political rally of the COVID-era, Trump complained to The Wall Street Journal that Americans were wearing masks as a way to signal disapproval of him, and not as a preventive measure. He complained that people can’t help but fidget with the coverings, similar to assertions he made on national television this week.

Weeks later, the president offered a different take, sounding like a mask evangelist and going as far as saying he resembled the Lone Ranger when he wears one. Still, Trump framed the issue as one of personal choice:

“If people feel good about it, they should do it.”

Later in July, Trump tweeted a black-and-white photo of himself wearing a mask and wrote that “many people say that it is Patriotic to wear a face mask when you can’t socially distance.”

“There is nobody more Patriotic than me, your favorite President!” he said.

Still this week, Trump returned to his old ways.

At a candidate forum televised by ABC News on Tuesday night, Trump praised a woman who removed her face covering to ask him a question.

“I love, I love what you just did,” Trump told her. On several occasions, Trump has become visibly irked by reporters who refuse his requests to remove their masks to ask him questions.

Trump also assailed Biden during the broadcast, faulting the former vice president for not acting to put in place a national mask requirement he has talked about doing if elected. Biden countered on Wednesday by reminding Trump that he is not the president.

“By the way, a lot of people don’t want to wear masks,” Trump said. “A lot of people think that masks are not good.” Pressed on who those people are, Trump replied, “Waiters.”

Trump often brings up the very early medical guidance for the public to not wear masks and leave scarce medical-grade versions for doctors and nurses. But experts soon began encouraging people to wear face coverings after learning that the virus is primarily transmitted through the air.

White House chief of staff Mark Meadows on Thursday cast doubt on the science as he sidestepped questions about who is influencing Trump’s opinions about masks. Meadows insisted that the president and administration officials have been consistent on the issue.

“If masks truly were the answer where everybody can go back to work, and that they actually work as the best protocol for keeping people safe I think everyone would be more than happy to wear their mask and return to work,” Meadows said. “I don’t think the science backs that up. I think it’s an extra precaution and it’s good.”