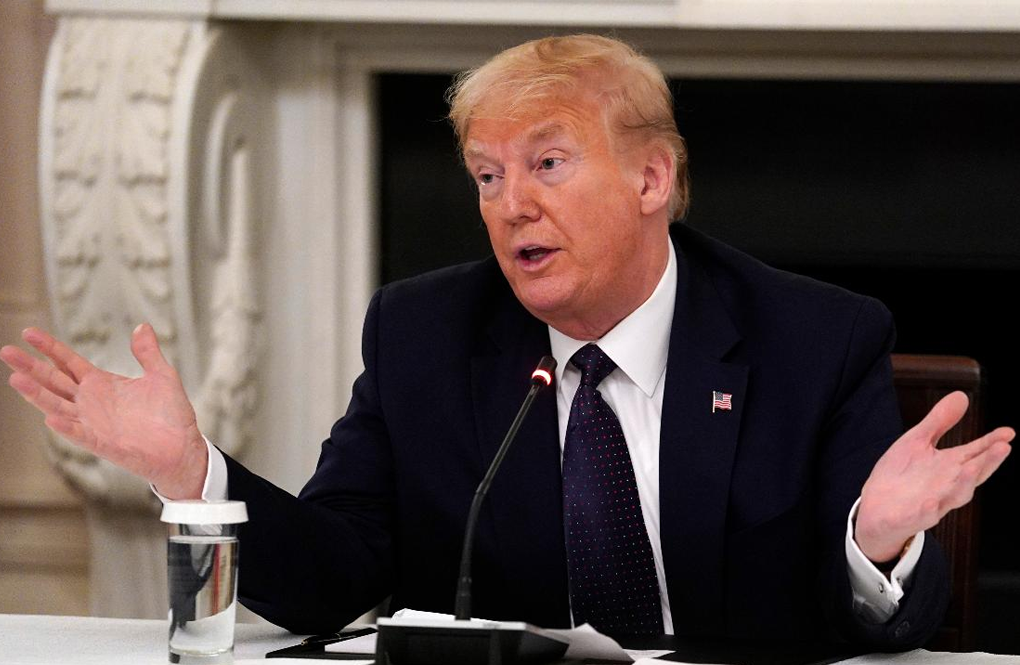 WASHINGTON (AP) — President Donald Trump emphatically defended himself Tuesday against criticism from medical experts that his announced use of a malaria drug against the coronavirus could spark wide misuse by Americans of the unproven treatment with potentially fatal side effects.

Trump’s revelation a day earlier that he was taking hydroxychloroquine caught many in his administration by surprise and set off an urgent effort by officials to justify his action. But their attempt to address the concerns of health professionals was undercut by the president himself.

He asserted without evidence that a study of veterans raising alarm about the drug was “false” and an “enemy statement,” even as his own government warned that the drug should be administered for COVID-19 only in a hospital or research setting.

“If you look at the one survey, the only bad survey, they were giving it to people that were in very bad shape,” Trump said. That was an apparent reference to a study of hundreds of patients treated by the Department of Veterans Affairs in which more of those in a group who were administered hydroxychloroquine died than among those who weren’t.

“They were very old. Almost dead,” Trump said. “It was a Trump enemy statement.” During a Cabinet meeting, he elicited a defense of his practice from other officials, including VA Secretary Robert Wilkie who noted that the study in question was not conducted by his agency.

But the drug has not been shown to combat the virus in a multitude of other studies as well. Two large observational studies, each involving around 1,400 patients in New York, recently found no COVID benefit from hydroxychloroquine. Two new ones published last week in the medical journal BMJ reached the same conclusion.

No large, rigorous studies have found the drug safe or effective for preventing or treating COVID-19.

Trump said he decided to take hydroxychloroquine after two White House staffers tested positive for the disease, but he already had spent months promoting the drug as a potential cure or preventive despite the cautionary advice of many of his administration’s top medical professionals.

“This is an individual decision to make,” Trump told reporters during a visit to Capitol Hill to meet with Senate Republicans. He later claimed, “It’s gotten a bad reputation only because I’m promoting it.”

Many studies are testing hydroxychloroquine for preventing or limiting coronavirus illness but “at this point in time there’s absolutely no evidence that this strategy works,” said Dr. Carlos del Rio, an infectious disease specialist at Emory University in Atlanta.

“My concern is, the president has a big bully pulpit … maybe people will think there’s some non-public evidence” that the drug works because Trump has chosen to use it, del Rio said. “It creates this conspiracy theory that something works and they’re not telling me about it yet.”

The veterans study that Trump slammed was an analysis by researchers at several universities of hydroxychloroquine with or without azithromycin in COVID-19 patients at veterans hospitals across the nation. It found no benefit and more deaths among those given hydroxychloroquine versus standard care alone. The work was posted on an online site for researchers and has not been reviewed by other scientists. Grants from the National Institutes of Health and the University of Virginia paid for the work.

Addressing concerns that Trump’s example could lead people to misuse the drug, White House press secretary Kayleigh McEnany said that “tens of millions of people around the world have used this drug for other purposes,” including malaria prophylaxis. She emphasized, “You have to have a prescription. That’s the way it must be done.”

The drug is also prescribed for some lupus and arthritis patients.

Trump said his doctor did not recommend hydroxychloroquine to him, but that he requested it from the White House physician.

That physician, Dr. Sean Conley, said in a statement that, after “numerous discussions” with Trump, “we concluded the potential benefit from treatment outweighed the relative risks.”

The Food and Drug Administration warned health professionals last month that the drug should not be used to treat COVID-19 outside of hospital or research settings due to sometimes fatal side effects. Regulators issued the alert, in part, based on increased reports of dangerous side effects called in to U.S. poison control centers.

Calls to centers involving hydroxychloroquine increased last month to 96, compared with 49 in April 2019, according to data from the American Association of Poison Control Centers provided to the AP. It was the second month of elevated reports involving the drug, following 79 calls in March. The problems reported included abnormal heart rhythms, seizures, nausea and vomiting.

FDA Commissioner Stephen Hahn said in an emailed statement Tuesday: “The decision to take any drug is ultimately a decision between a patient and their doctor.”

As research started to emerge that hydroxychloroquine was not helpful, and even potentially harmful, in battling COVID-19, the president’s public rhetoric in support of the drug had faded. But his private hopes had not, according to three White House officials and Republicans close to the White House not authorized to speak publicly about private discussions.

Trump also lashed out at House Speaker Nancy Pelosi, calling her a “sick woman” who has “a lot of mental problems” after she questioned Trump’s use of the drug because he is 73 and falsely labeled him “morbidly obese.” Her comments were followed by Senate Democratic leader Chuck Schumer, who told MSNBC that Trump’s move was “reckless, reckless, reckless.“

After two staffers were known to test positive for COVID-19 earlier this month, the White House mandated that those in the West Wing wear face coverings and introduced daily testing for the president, vice president and those they come in close contact with.

Pence told Fox on Tuesday that he was not taking the drug because his doctor did not recommend it, but said he “would never begrudge any American taking the advice of their physician.”

Prescriptions for hydroxychloroquine surged roughly 80% in March to more than 830,000 compared with same period in the prior year, according to data tracking firm IQVIA. That jump in prescribing came before the federal government accepted nearly 30 million doses of the drug donated to the strategic national stockpile by foreign drugmakers. Since then, millions of those tablets have been shipped to U.S. hospitals nationwide for use treating patients with COVID-19.

Marchione reported from Milwaukee and Lemire reported from New York. AP writers Matthew Perrone and Darlene Superville in Washington contributed to this report.