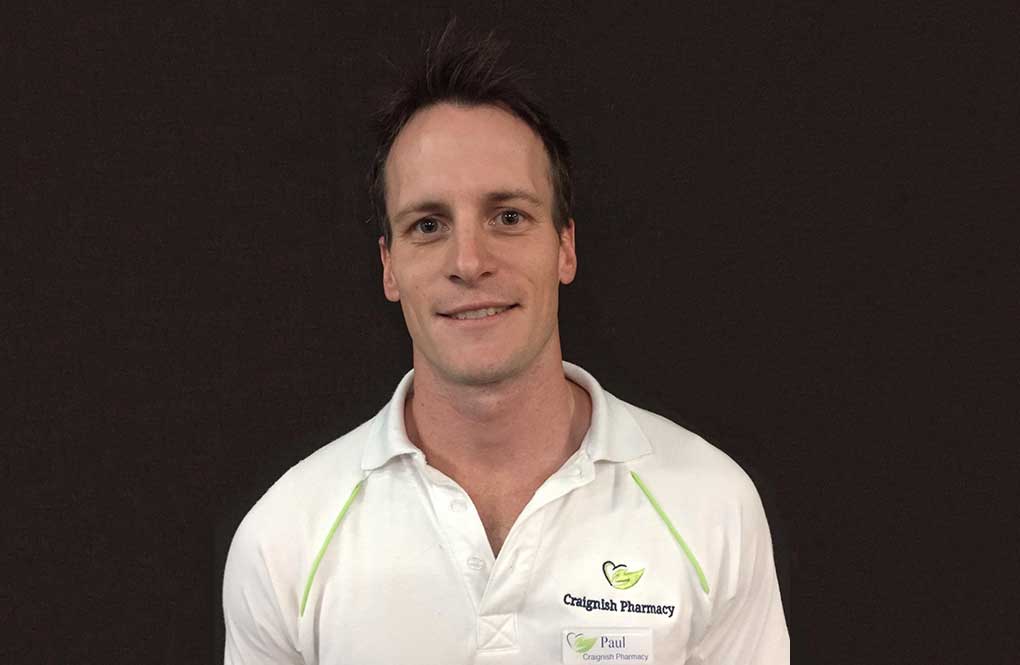 Paul graduated from Griffith University in 2010 and became sole proprietor of Craignish Pharmacy, a small community pharmacy in Queensland, in 2016. We spoke with him about his motivations and the challenges and rewards of being a pharmacy owner.

After graduation, Paul completed his intern year at Terry White Chemist Australia Fair at Southport. He had worked at Helensvale Amcal throughout his degree and enjoyed gaining practical experience while studying pharmacy. However, he lost some of his passion for the field during his intern year and started to question whether pharmacy was right for him.

Paul stuck it out and became a registered pharmacist in 2011. He left the Gold Coast and headed to the country for a position at Maryborough Friendlies, motivated by the lure of higher pay – he was earning about 25% more per hour than if he’d stayed working on the Gold Coast or in Brisbane. The new environment suited Paul, and he rediscovered his love of pharmacy.

Paul was keen to take the next step and become a managing pharmacist. Jarred Smith – a partner in three pharmacies in Hervey Bay (a coastal town about 30 minutes from Maryborough) – offered Paul a managing pharmacists’ position at his Urangan store, which Paul accepted.

Urangan Pharmacy has 20 staff and is one of the busiest pharmacies in Hervey Bay, so Paul was throwing himself in the deep end. Jarred was a great support to Paul, who was empowered to make decisions and learn about pharmacy management and business. Having a good mentor to learn from was instrumental to Paul’s success.

How did you know you were ready for pharmacy ownership?

Having managed a large pharmacy for four years, I felt I had been exposed to – and overcome – most things that could go wrong. Additionally, a couple of older pharmacists had expressed interest in partnering with me if I wanted to buy, giving me the confidence that I could run a successful pharmacy.

As a manager, I would go above and beyond but still receive the same hourly rate. As an owner, you get to reap the rewards of your efforts.

Why did you buy Craignish Pharmacy?

I looked at a few options. After consulting with my accountant, lawyer and bank, I felt Craignish Pharmacy was a good fit and priced so I could commit as a sole proprietor. Craignish was a growth area, and I could see the pharmacy had strong potential as it was only running at around 30% compared to Urangan Pharmacy, which was running at 90%. The location –  only 15 minutes from my home in Hervey Bay – was also appealing.

What were the main challenges you faced in the first 12 months?

Looking back, what were the key business decisions you made?

How is the business going now you’re approaching the two-year mark?

What are the rewards you enjoy owning a small community pharmacy in a regional township?

I bought the pharmacy at a competitive price in terms of ROI because it was regional and less competitive than options in metro areas and major cities. I know my customers by name and understand their profiles so I’m better able to look after their health. These relationships make it easier for me to get my top customers to follow my advice.

What’s your message to other young pharmacists who have a dream of pharmacy ownership?