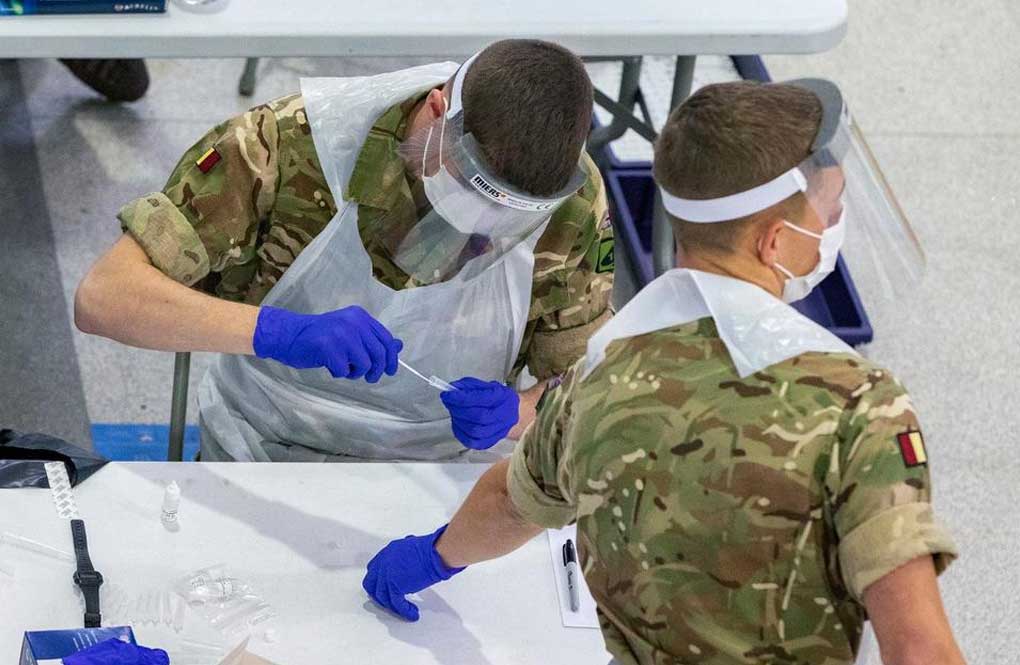 LONDON — Some tentative signs emerged Friday to suggest that the U.K.’s coronavirus resurgence is leveling off after wide-ranging restrictions were imposed.

In its weekly survey of new infections, Britain’s statistics agency said the rate of growth of the virus in England appeared to be slowing around the time a new four-week lockdown took effect on Nov. 5. And the British government’s main scientific advisory group said the virus’ reproduction rate dipped even before the latest lockdown.

Though both are encouraging indicators, scientists say the epidemic remains at high levels and will take weeks of suppression for it to go into retreat.

At first glance, both indicators appear to run counter to the near 50% rise in the number of new infections to 33,470 that was recorded on Thursday. The record daily increase stoked fears about the current outbreak, though some experts said it could be due to the new citywide testing program taking place in hard-hit Liverpool. On Friday, the number of cases dipped to 27,301.

Like others in Europe, the four nations of the U.K. have reimposed restrictions over recent weeks to get on top of the virus’ resurgence. With new infections rising, the number of COVID-19 patients being hospitalized has increased sharply and so have deaths. On Friday, the U.K. recorded another 376 virus-related deaths, taking the total to 51,304, Europe’s highest.

In England, authorities imposed local restrictions on areas seeing the highest number of new cases, before the government changed tack and announced a national lockdown. Scientists said Friday’s evidence suggested that local measures were having an impact in suppressing the virus, particularly in the northwest of England, which faced the tightest restrictions before lockdown.

“These results are in line with other sources of data that suggest that the tier system was having a beneficial impact,” said Paul Hunter, a professor in medicine at the University of East Anglia.

The spread of the virus in Europe has prompted many countries to reimpose lockdown restrictions that they had slowly withdrawn during the summer. Across Europe, there is evidence that the fresh measures are slowly beginning to work. As in the U.K., there is evidence that the surge of new coronavirus cases appears to be slowing in Germany and France. Others, like the Czech Republic, are now seeing falling new cases.

The lockdown now in force in England is almost as restrictive as the one in the spring and aimed at making infection numbers far lower, leading eventually to lower rates of hospitalization and death.

As well as pushing a “stay at home” message, the British government has closed pubs, restaurants and stores selling items deemed to be non-essential such as books, clothing and sneakers until at least Dec. 2. Unlike the spring lockdown, schools and universities, as well as construction sites and factories, remain open.

Prime Minister Boris Johnson has voiced hope that the lockdown will bring the reproduction rate of the virus below 1, which would mean the epidemic is shrinking. On Friday, the Scientific Advisory Group for Emergencies, or Sage, said the rate had dropped to between 1 and 1.2 across the U.K. For the past few weeks, Sage has put the R at between 1.1 and 1.3.

The weekly infection survey from the Office for National Statistics also pointed to an easing in the rate of growth of the virus. It found that an estimated 654,000 people in private households in England had COVID-19 between Oct. 31 and Nov. 6, or around 1.2% of the population.

Though the figures represent a jump from 618,700 people, or 1.1% of the population in the period Oct. 25-31, the agency said “the rate of increase is slower than previous weeks.”

The weekly survey, which tests thousands of people whether they have coronavirus symptoms or not, straddled the start of the latest lockdown in England.

The agency found that the northwest of England, which includes the major cities of Liverpool and Manchester, continued to have the highest rates of virus infections at 2.2% of the population but that the spread seemed to be slowing.

Overall, it said that the virus’ spread in England was increasing in the South East, South West, East Midlands and the North East, whereas some other regions, including London, appear to have levelled off.